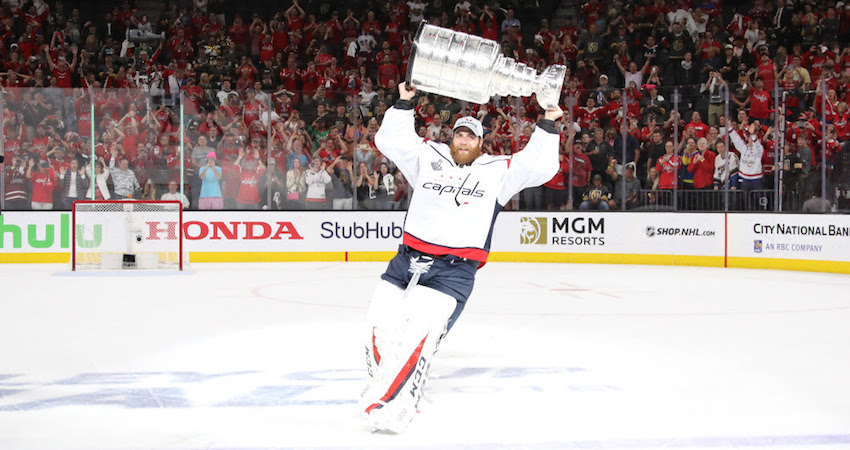 The Mindful Game of Being a Stanley Cup Winner

Last night, my home city of Washington, DC exploded with joy when the Washington Capitals won the Stanley Cup after 40 years of stomach-churning waiting. Texts and photos of champagne popping were lighting up my phone past 1:00 am. Like watching athletes win Olympic Gold, I was deeply moved by witnessing the heights of our human potential. My work always takes me to the question - what does it take for humans to flourish at that level?

Sparked by a Washington Post piece on Monday titled “Caps are living in the moment, not in past” which made my mindfulness antennae stand up, I started to tune in very closely this week to the mental game of championship ice hockey.

Intrigued, I did some research, and discovered more about the mental game of the goalie Braden Holtby. No job in professional sports demands greater attention for longer stretches of time than an NHL goalie. A baseball pitcher can take breaks during innings, but an NHL goalie has to be able to access a deep place of calm, sustain focused attention and regulate emotional reactions without breaks. The Washington Post calls Holtby “the quiet Caps goalie whose demeanor evokes a mellow peace marcher” and he used to be “far more fiery during his teenage years - breaking sticks and losing concentration at the slightest sign of adversity” according to Sports Illustrated. There is more to this capability than simple maturity - he learned mental training exercises for staying calm under fire with sustained evenness and concentration.

His mental techniques? Holtby learned to breathe deeply from the belly and reframe a negative thought with positive self-talk. When I coach leaders who deal with chaos and complexity at work, I show them how to first direct attention into the body with the breath, which calms the nervous system and gets the focus out of the mind and away from the inner critic, worry and rumination. The Washington Post reported that it took four years under Coach Barry Trotz for the Caps to learn to breathe under pressure.

When the body is calm and the mind is clear, you can get “cognitive” again- using a positive, encouraging or kind phrase to offer immediate support and focus for the mind. Researchers have found that the ability to switch to supportive self-talk and a positive mindset are the pillars of resilience. This is in sync with Holtby’s positive self-talk method.

Can you do this in the split-second time window that a goalie has on the ice?  Yes, with training – and practice, practice, practice – just like the technical skill side of sports. By training when we are not in the game (whether it is a Stanley cup final or a high stakes business meeting) we develop the neural pathways, mental skills and new default response patterns that kick in during the heat of the game. I often teach focused-attention training using the breath as the anchor of attention (see Mindful Breathing in my book The Mindful Day) but anything can be used as an anchor of focus. During play stoppages, Holtby directs his attention to following one droplet of water from his water bottle as it plummets toward the ice. By following the water droplet, he keeps his mind clear and focused and does not let it get cluttered with worrying about past plays or speculative thinking about what’s next. He is also doing a micro-meditation - an isolated slice of mindfulness meditation. His teammate, Capitals backup Phillip Grubauer explains it this way: “You can’t still think about that goal from before. You’ve got to focus on the next shift, stop the next puck. You’ve got to have a clear mind and think about that stuff after the game.”

This morning I was coaching a business strategy leader. He is fine-tuning his approach to rigorous questioning with his team when in strategic brain-storming sessions. He started a post-meeting reflection practice - a brief review of how he showed up in the meeting, his impact and his intentions. This is a similar approach to what happens off the ice with the Capitals. After the game, as told to Sports Illustrated, positional coach Scott Murray sits to Holtby’s left and performs a debrief: how certain saves unfolded, what happened on goals allowed, anything else that may pop into his mind. When Holtby gets home, he reviews a video compiled during the game in a software program called Hudl and tagged with a label for every save, every scoring chance and every puck-handle. He spends about 20 minutes reflecting on “What did I see here? What was my thought process here? How did this puck get in? How did that miscue happen?"

The Only Useful Focus

Thomas Boswell reported in the Post that in past years the Caps would get ahead of themselves, “riding the emotional riptides of the moment” and giving lengthy answers to “what-if” scenarios in the post-season playoffs. Coach Trotz has shifted that culture to one of being focused on one game, one minute, one puck at a time. Now when pressed to look further and when asked about momentum, they answer with a “no answer” – and as Holtby told the Post “We’re just putting our head down and focusing.” Trotz added “… momentum from game to game? I don’t think there is any. Every series shows that. Each game is separate and “each moment within the game is the only useful focus.” We have to keep our attention in the present.

In elite performance, players and coaches look for any advantage that can result in a higher score by the final horn, and going all the way in the series. Training in the mental game of focus, breathing and staying present has become a clear strategy. Last night was unforgettable as I watched Ovechkin on the screen, his head in his hands blocking out the enormous incoming stimulation and force of energy in the last minute of the game. I could feel him! This moment was quickly followed by the incredible burst of euphoria from the team, coaches and fans when the booming horn sounded and the Stanley Cup was soon lifted overhead.

Tweets by @lauriecameron
Join Our Community
Subscribe to our newsletter